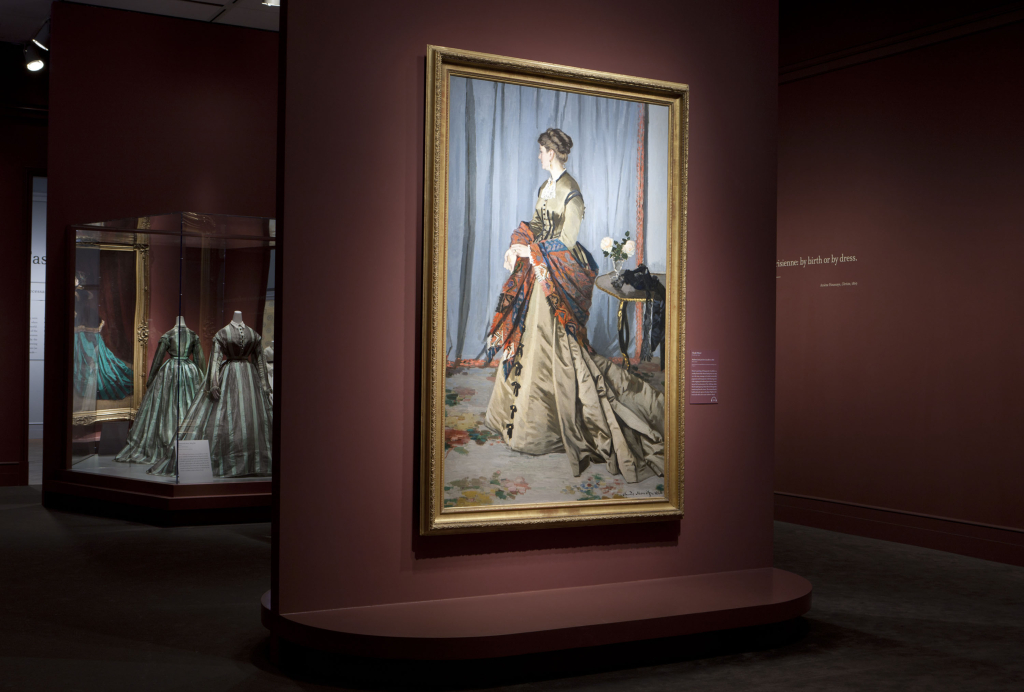 “If I were permitted to choose amidst the jumble of books that will be published a hundred years after my death, do you know which one I would pick?

No, it is not a novel that I would choose inside this future library, nor a history book: which, when it offers anything of interest, is just another novel.

I would quite simply pick, my friend, a fashion magazine in order to see how women will dress a century after my passing. And these rags would tell me more about humanity’s future than philosophers, novelists, preachers, or scholars.” – Anatole France

The Impressionism, Fashion, and Modernity exhibit seen recently at the Musée d’Orsay in Paris, The Metropolitan Museum of Art in New York, and the Art Institute of Chicago was a groundbreaking display of late 19th century paintings paired with clothing and accessories of the time. It was not simply a single exhibit that toured to three locations, but an exciting partnership of some of the greatest scholars on the topic from around the world. Conceptually dreamt up by Gloria Groom, the David and Mary Winton Green Curator in the Department of Medieval through Modern European Painting and Sculpture at the Art Institute of Chicago (who has since been named the museum’s first senior curator). Groom brought together curators from Paris and New York to brainstorm and build this wonderful exhibition. Each museum that hosted it, then, worked with their own collection of items on the topic, adding to it a unique mix of items based on partnerships they were able to arrange with other museums. As a result, each of the three museums displayed variations of the same exhibit. I had the wonderful opportunity to hear Gloria Groom speak and view the AIC’s installation in person while visiting Chicago.

Many Impressionist paintings are portraits of modern city dwellers in their then cutting edge clothing. This movement of art was so closely tied to the advancements in modernity, particularly in Paris. France had been a leader in fashion since the 17th century, but the “la Parisienne” style of dress sweepingly took Western society by storm and fashionable people from America to Europe were clamoring to attain the look.

Groom was adamant in insisting that this was a painting exhibit, not a clothing exhibit.  But what may have been lost on these painting scholars, is that to those of us that study dress, every glimpse at a portrait is a chance to study clothing. The installation centers on a collection of paintings that work together to capture the mood and style of the 1860s to 1880s. From there, period garments were selected that were similar to those captured in the paintings. There is only one example in the installation of the exact dress captured in a painting on display. Groom reached out to several dress historians and curators of other museums to help with the Chicago exhibit, as AIC does not maintain any collection of historic garments. Groom accurately captured the inherent difference between painting and material curators in her contrasting descriptions of the time and care taken to mount the exhibit. She described her own installation process roughly as slapping paintings up on a wall, but jokingly referred to the on-site garment set-up by the Met and the Chicago History Museum curators as a “contest to see who could be more careful.”

One element that made this more than simply a painting exhibition with some dresses sprinkled throughout, was the incredibly clever and thoughtful display design. With the painting paired opposite the matched garments with a mirror behind the form, one was able to stand and compare the painting and clothing against one another. In addition, visitors couldn’t help but see themself in the mix, adding a forced immediacy in relating to both the painters and subjects of late 19th century Paris.

Upon entrance to the exhibit, one quote displayed prominently on a wall seemed to perfectly capture the entire theme:

“There are two ways to be a Parisienne, by birth or by dress.” -Arséne Houssaye

First was Claude Monet’s Camille (1866), a prime example of the focus of dress by painters of this era. The subject, Camille, has her back turned and is walking away from our view. The long train of her black and green striped dress draws focal attention, and trails out of the frame. Paired with it was a lovely dress of the time, which notably lacked some of the drama of the painted dress, but beautifully captured the vibrancy of color obtained from (what is most likely the use of) the newly invented aniline dyes. 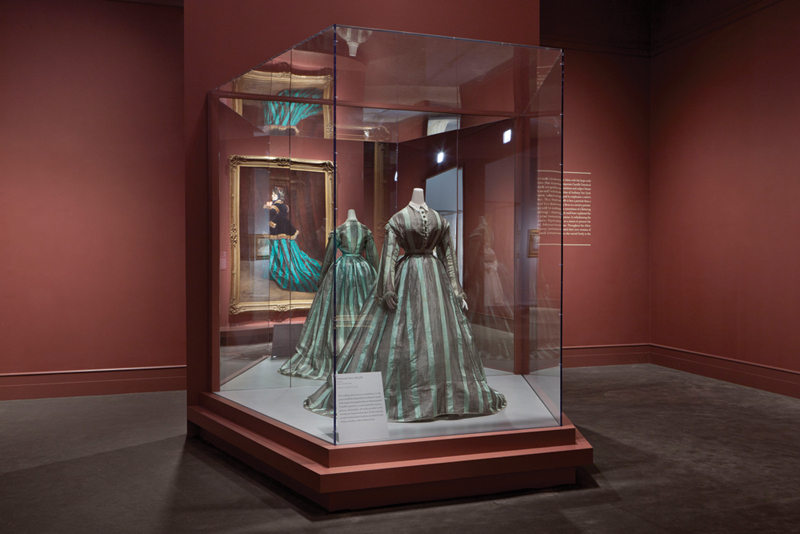 Turning the corner in the gallery revealed the painting of Madame Louis Joachim Gaudibert by Monet, which Groom nicely described as “a mountain landscape of cascading folds.” The subtle tones of the dress paired with the vibrant Eastern-inspired shawl was a beautiful sight both in painting and historic garment. 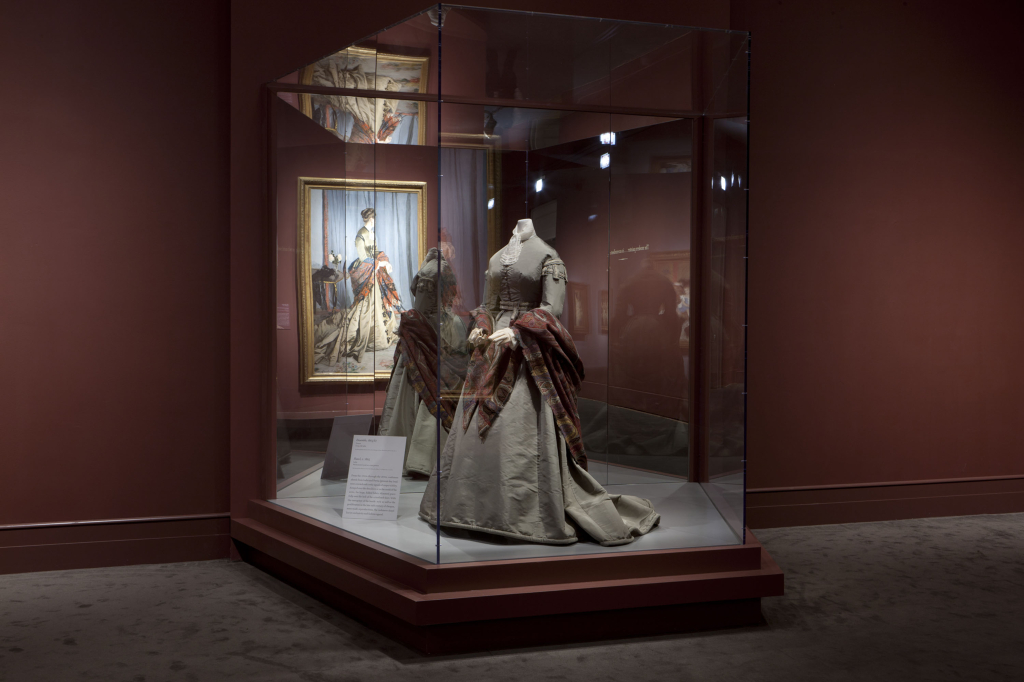 Moving through the exhibit there were many wonderfully themed rooms and vignettes. One particular theme strewn through multiple rooms was that of leisure activity that featured excellent examples of day dresses. One of the most stunning pieces was a woman’s three-piece seaside ensemble, on loan from The Los Angeles County Museum of Art, set in the middle of a room so that visitors could view every angle of the breathtaking embroidery. 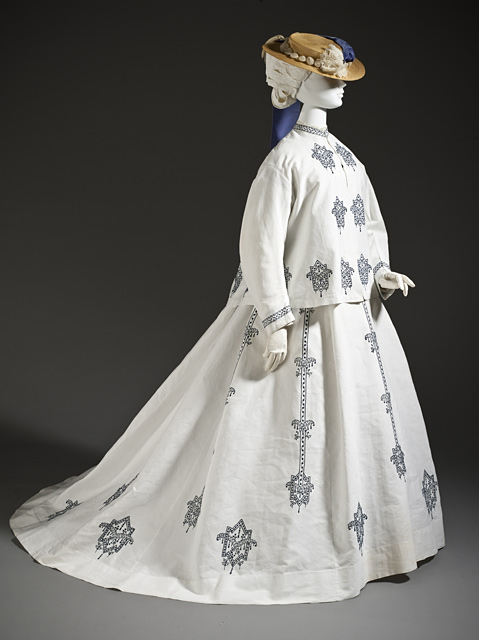 An adjoining room was set as a park, complete with astroturf, garden and picnic themed paintings, and an array of 1860s lightweight dresses. These delicate cotton and linen dresses were predominately white, with some subtle floral stamped prints. 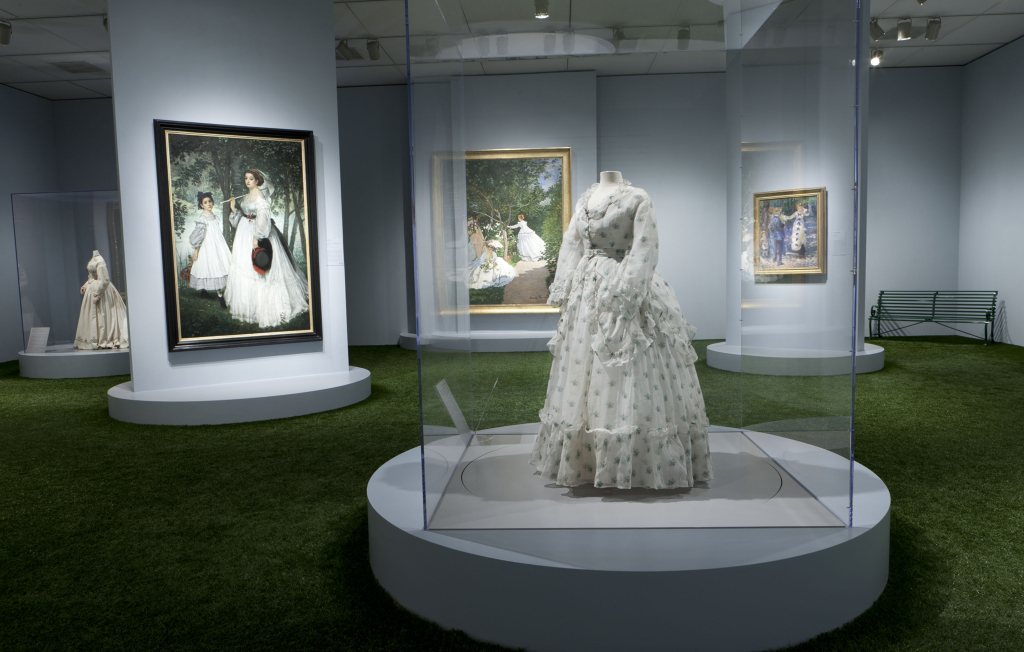 Also on display was a wonderfully complex white cotton batiste dress from 1878 which bore many similarities to James Tissot’s paintings of the same time. 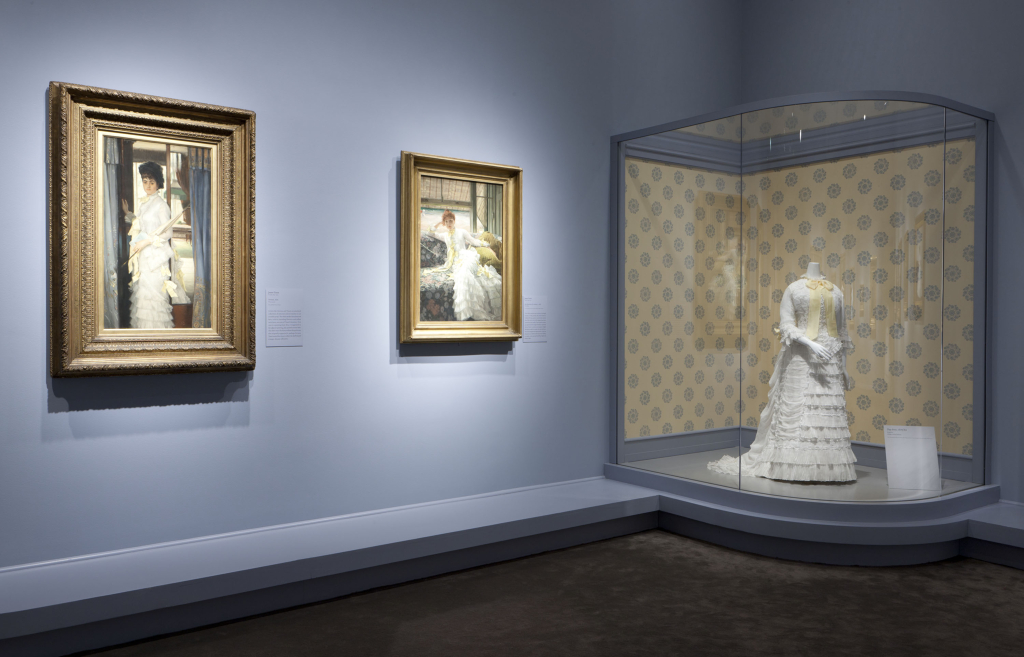 One of the most fascinating rooms focused on the growth of department and clothing stores. Tissot’s The Shop Girl, one of few paintings of consumerism, greeted visitors at the entrance. 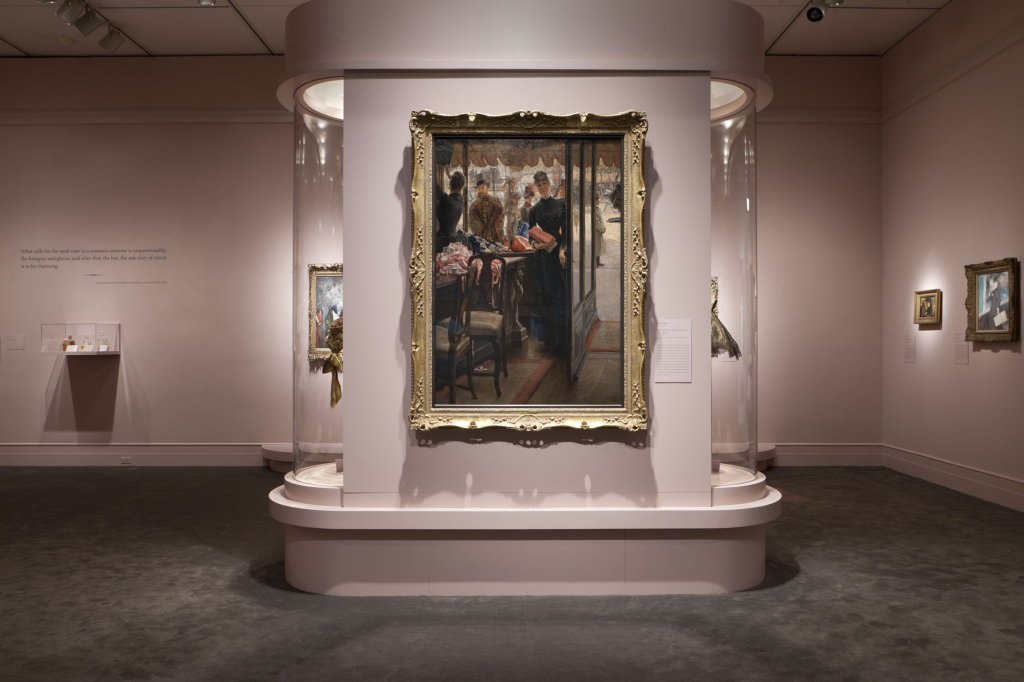 Also on view was Degas’ Millinery Shop, paired with an incredible display of late 19th century hats arranged at varying levels to mimic the composition of the painting. 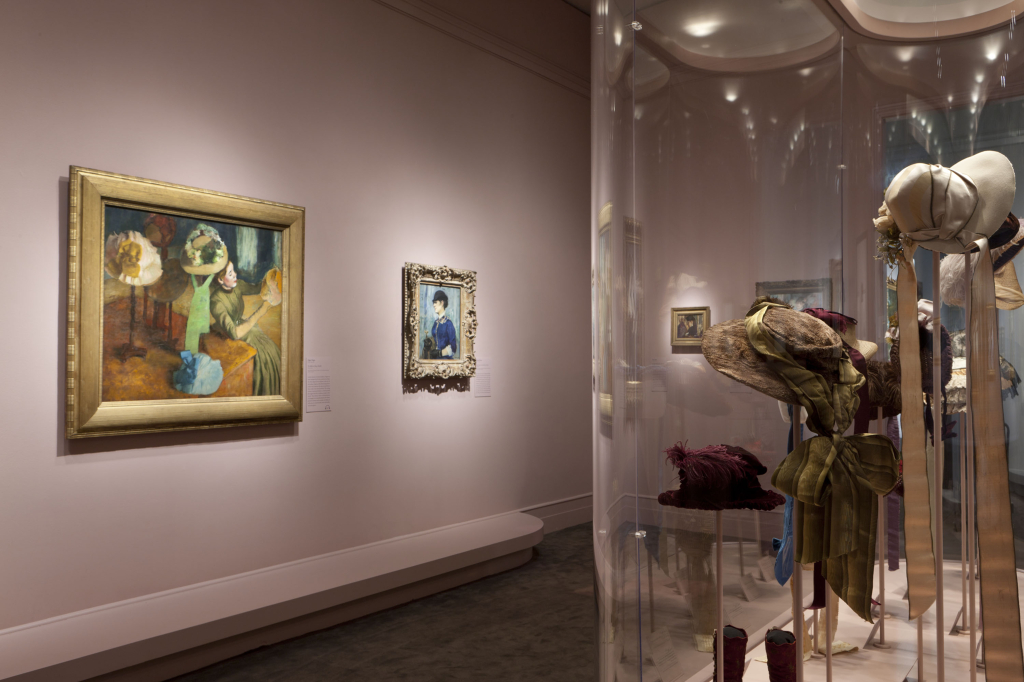 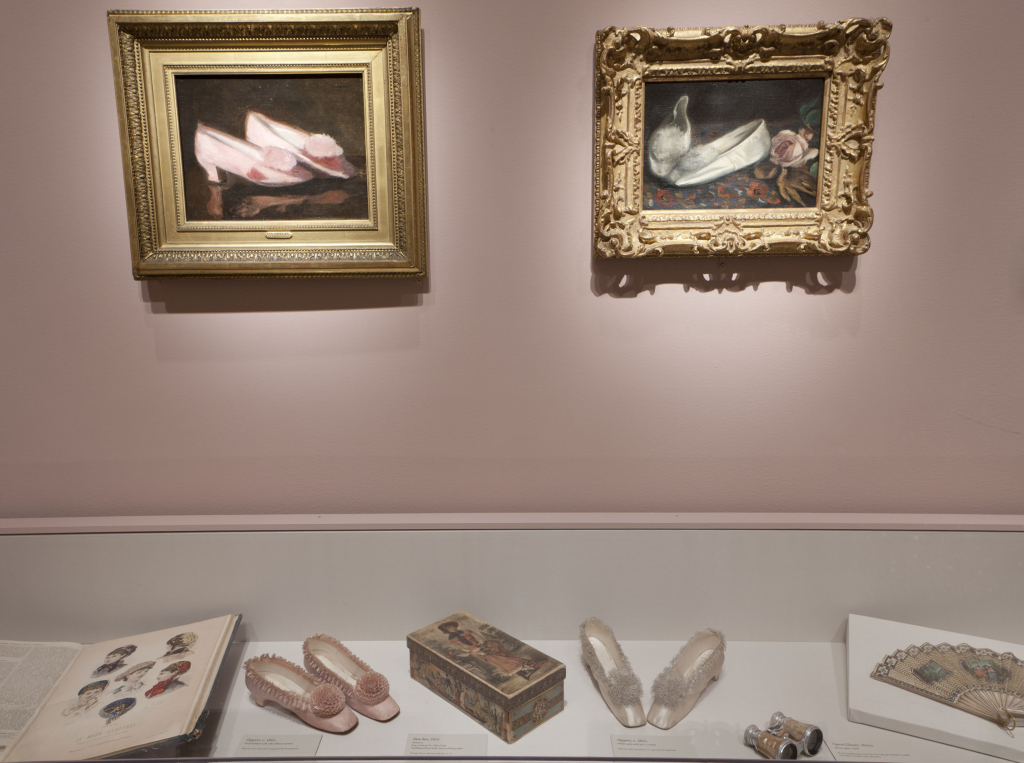 A lighthearted collection entitled The Assault of The Shoe by Henri Charles Guérard, which features a small army of Chinese men attacking ladies’ shoes was placed nearby. 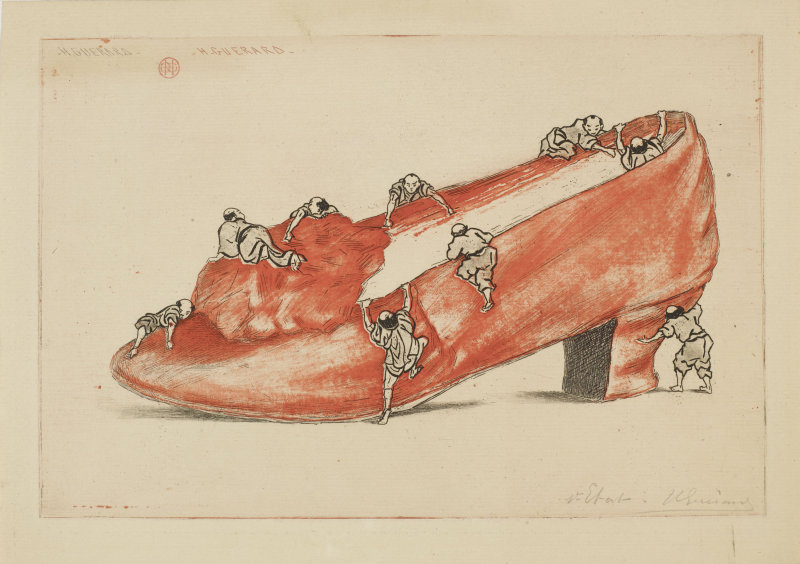 The Assault of The Shoe by Henri Charles Guérard, Art Institute of Chicago.

Moving onto more formal garments, the following rooms featured exquisite examples of formal and couture gowns. Edouard Manet’s La Parisienne with its beautiful form and depth was paired nicely with a black silk cuirass bodice and skirt, a phenomenal example of pleating, beading, and tailoring. 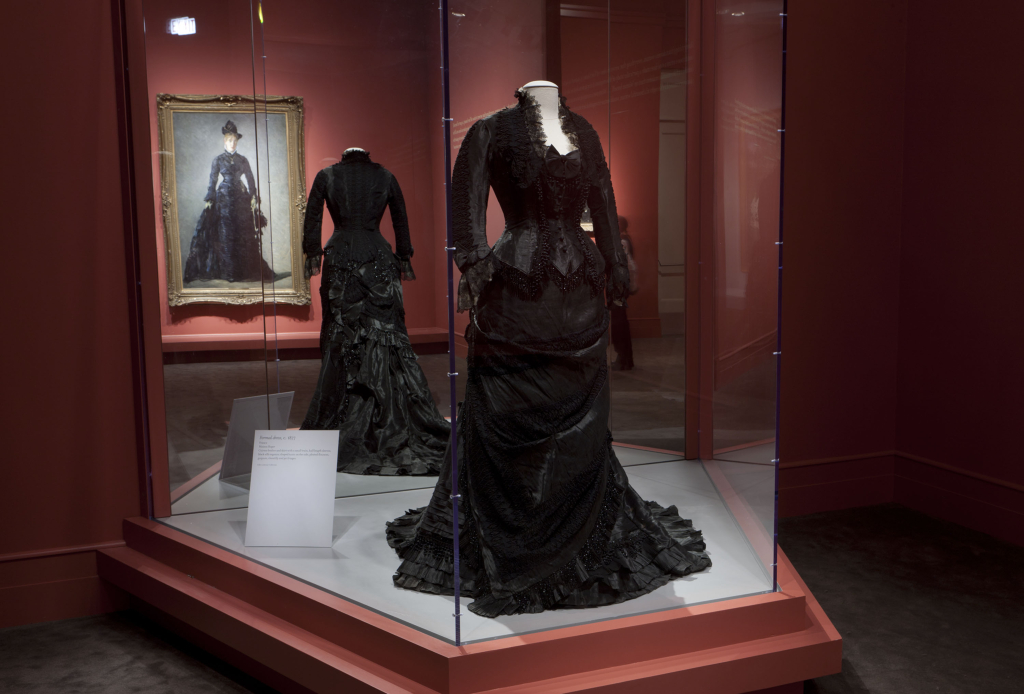 It would be hard to address this time period without displaying at least one Charles Worth gown. Not paired with a specific painting, the stunning ice blue satin gown on loan from the Museum of the City of New York featured ball fringe, artificial flowers, and a wonderful example of uncut ribbed velvet. 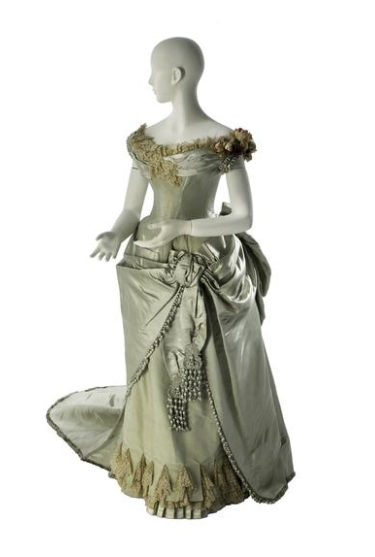 Charles Worth evening gown, Museum of the City of New York.

A room devoted to menswear left much to be desired. The room featured wonderful paintings such as the Portrait of Edouard Manet by Henri Fantin-Latour and the Portrait of Auguste Renoir by Frederic Bazille, but lacked strong historic garments. The three-piece suit on loan from the Met showed nice tailoring, but lacked the panache of unmatched suiting typical of the period and predominately featured in paintings throughout the exhibit. 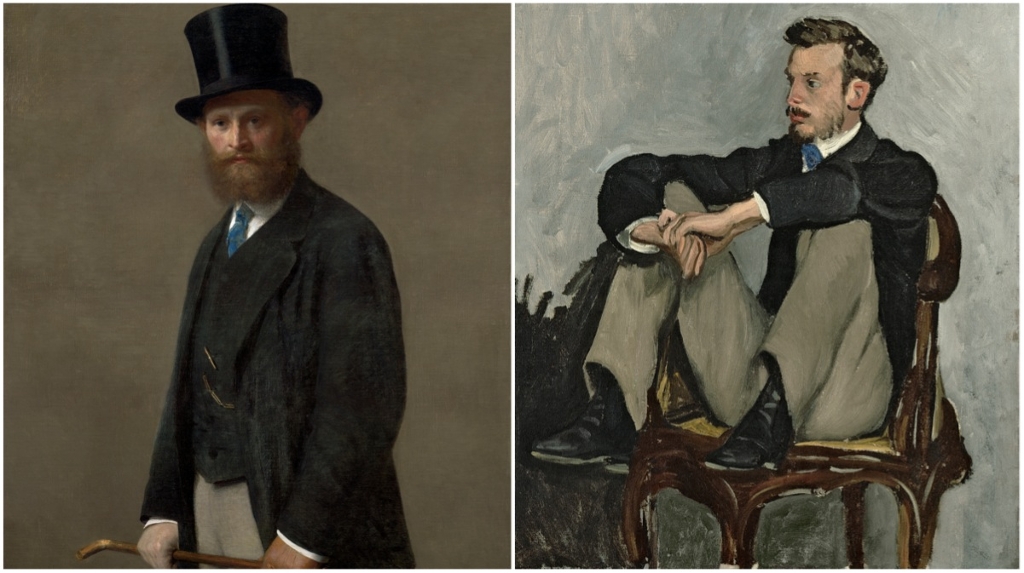 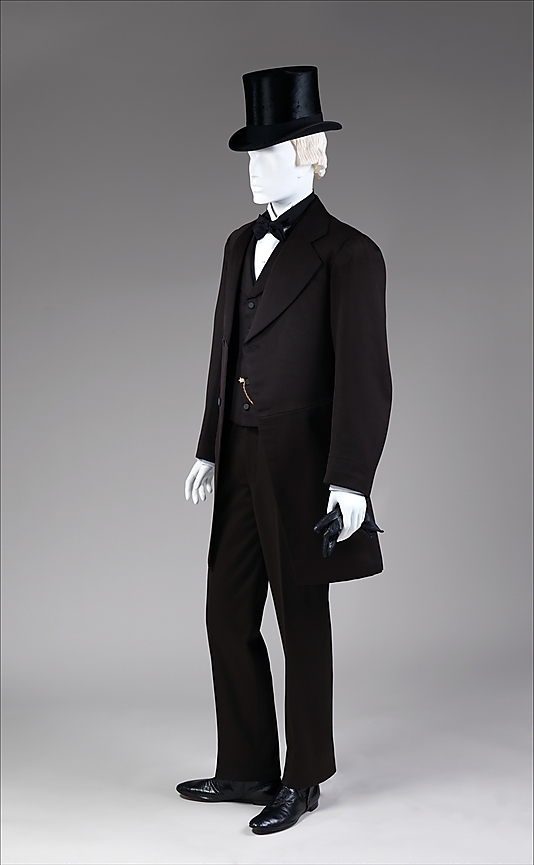 A room of fashion plates and artist study sketches allowed visitors to past the complexity of a painting to the simplicity of line and silhouette. One of the most breathtaking displays of the exhibition was a touch screen display that allowed visitors to turn the pages of a digital facsimile of Henri Somm’s 1885 sketchbook. (See link at the bottom of this review to AIC site where you can flip through the entire sketchbook!) 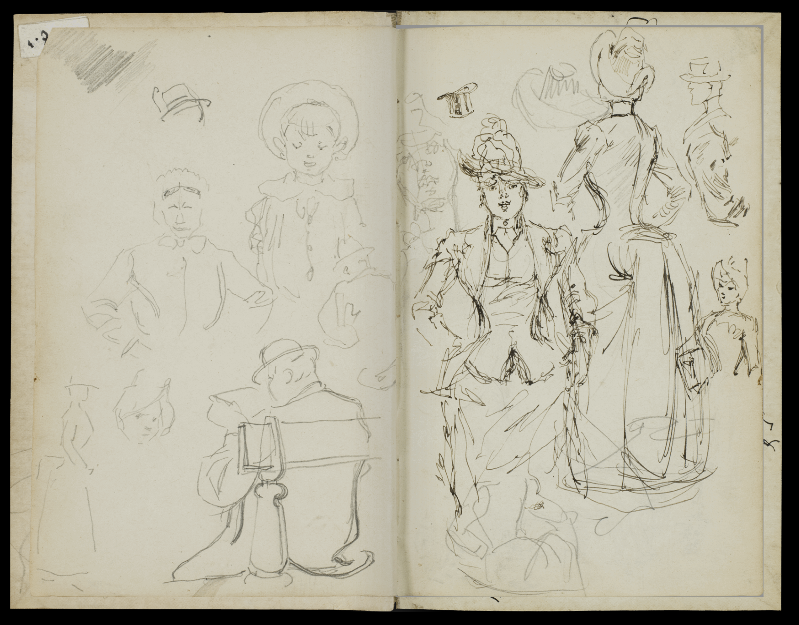 The exhibit crescendoed with two of the most breathtaking displays. First was In The Conservatory by Albert Bartholomé of the artist’s wife paired with the actual dress worn in the painting that was boxed up and saved when she died shortly thereafter. The cotton printed dress featured purple dots and stripes. Most fascinating up close was the revelation that what at first glance appeared to be a solid purple skirt, was merely the stripe fabric of the sleeve, pleated. I can only imagine how gorgeous the kick out of white would have been when this dress moved. 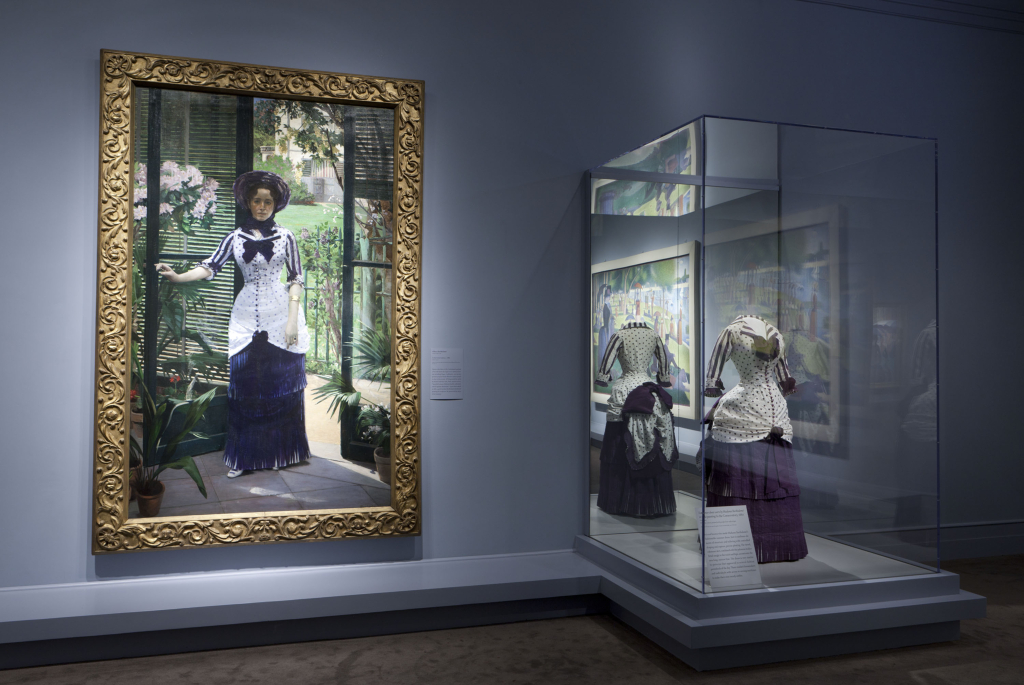 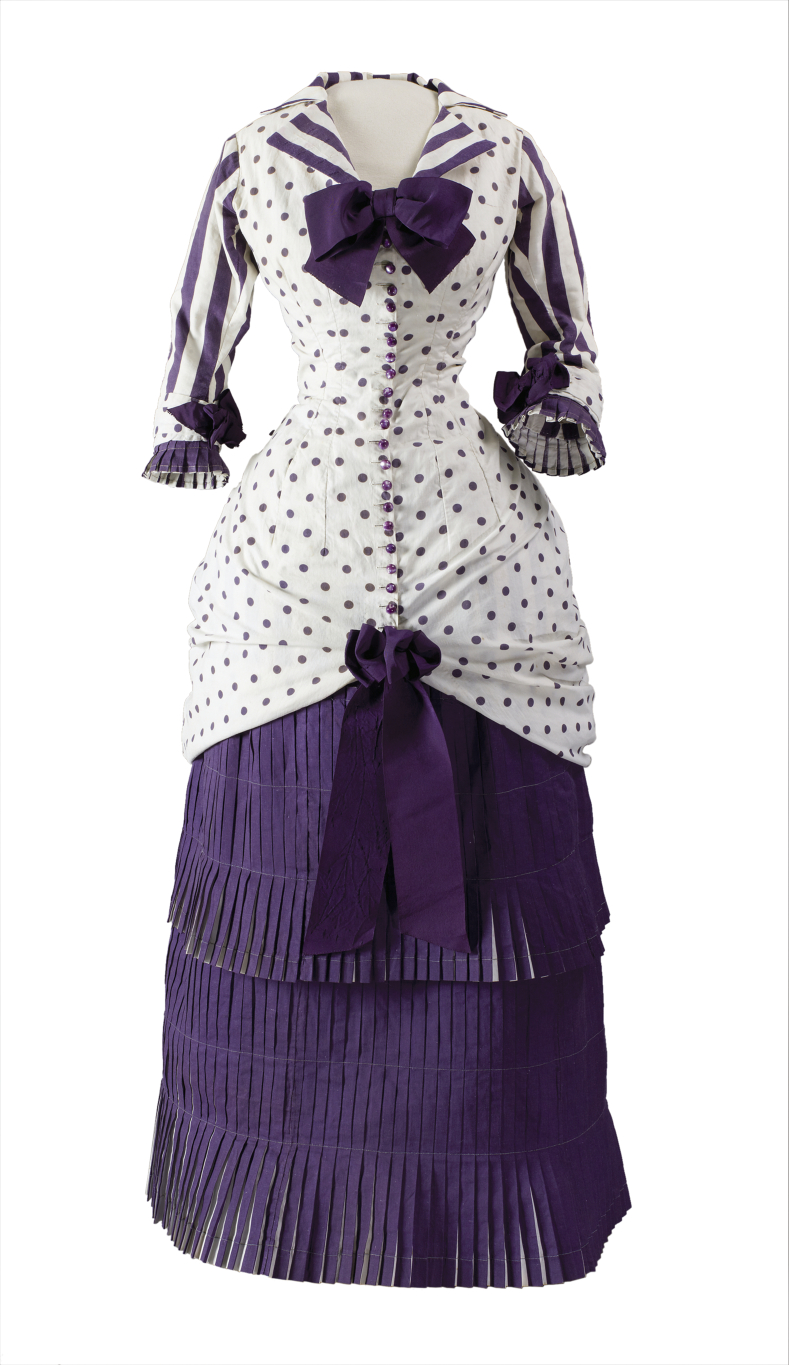 And lastly, the Art Institute of Chicago’s very own A Sunday Afternoon of the Island of La Grand Jatte by George Seurat (1884) paired with a case of tea-cart bustle dresses. The sheer size of this stunning 81.7” x 121.25” painting was enough to cause visitors to want to take advantage of the provided bench to sit and take it all in for several minutes. The nearby case of dresses included beautiful examples of the last bustle movement of the century in rich colored silks and velvets, and a wonderful opportunity to feature another Charles Worth dress. 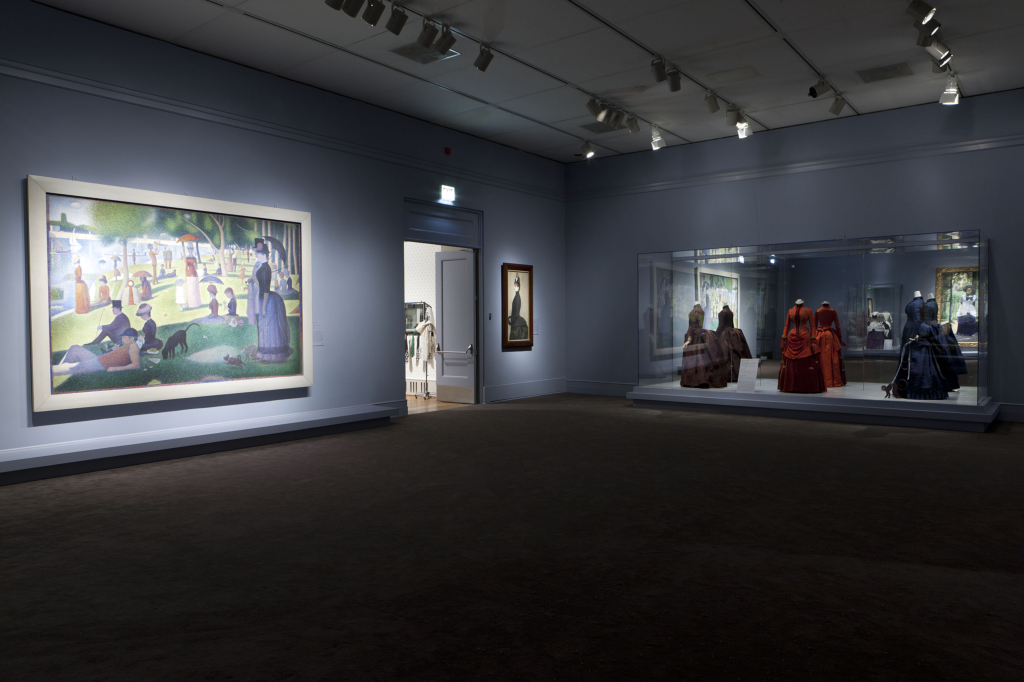 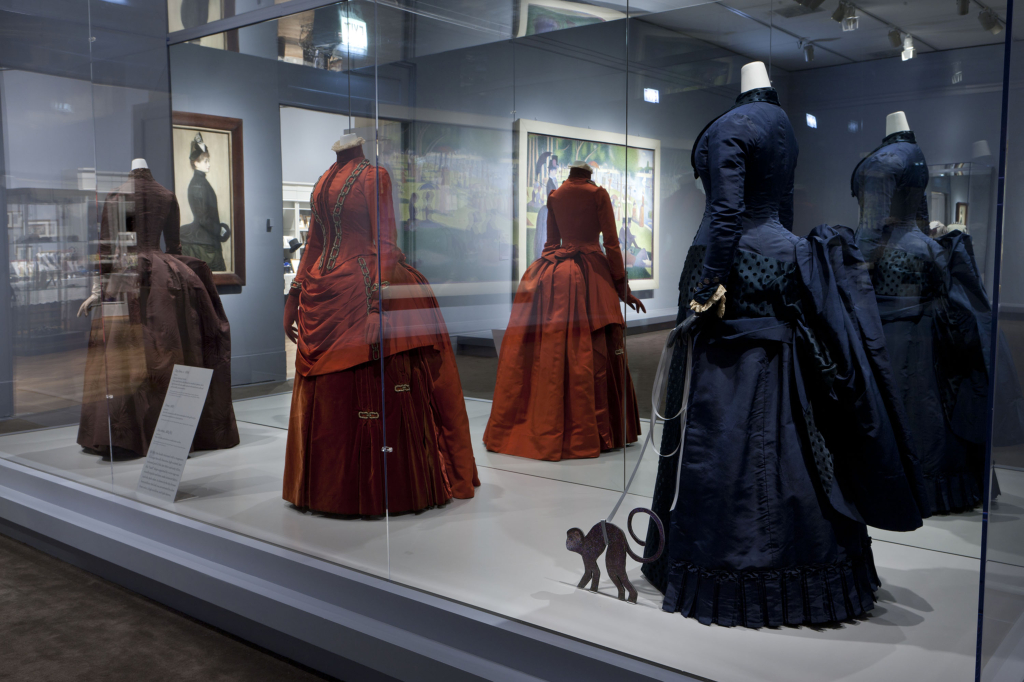 Having been the last of the exhibit locations, if you didn’t get a chance to see this exhibit I am afraid to say that you have missed your chance. However, there was a fascinating book produced that brings together essays and images of the paintings and garments on display at all three locations.