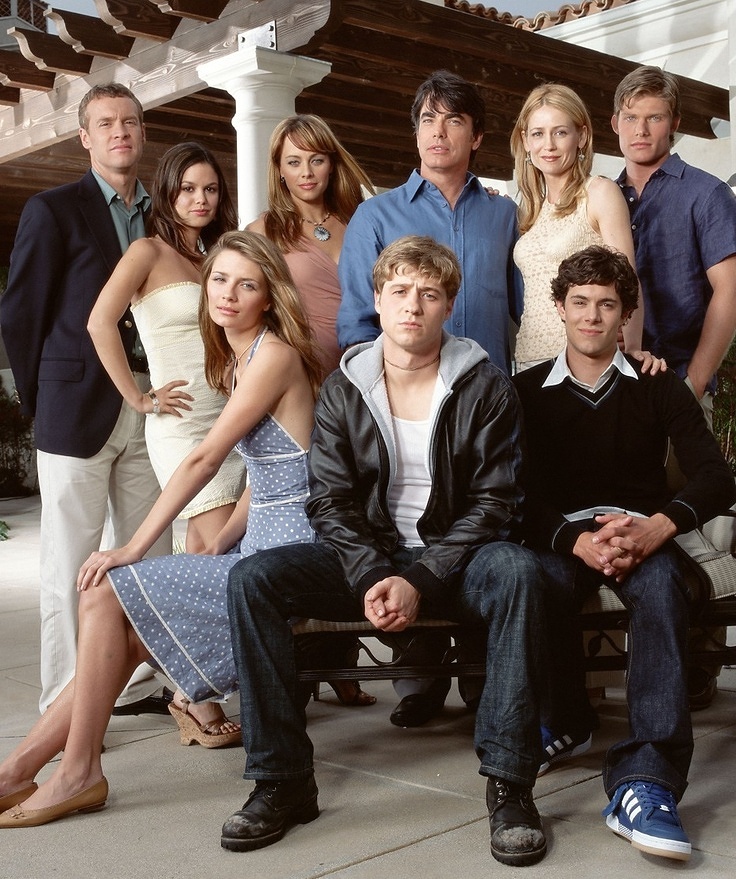 The O.C., the American teen/twenty-something prime time soap opera first aired on FOX on August 5, 2003.  In celebration of the 10 year anniversary of the show, we take a look back at the iconic characters and costume design that made the show so popular.

The story plays against a backdrop of Orange County, California, the wealthy Southern California county that sits along the coast between San Diego and Los Angeles. Ryan, the troubled bad-boy from Chino (in neighboring San Bernardino County, ewww) has found himself behind bars.  His idealist court-appointed lawyer Sandy Cohen, the former hippie now married to one of the wealthiest women in Newport Beach, brings him home to their mansion when Ryan has nowhere else to turn.  After a series of twists and turns, the Cohens take Ryan in, permanently. Herein lies the underlying premise of the series, the age-old insider/outsider predicament. Though, as we get to know each character, we find that everyone’s trying their hardest to appear as if they belong.

In The O.C., we see a wonderful mix of well-known character types and the costuming is very successful in helping to support these archetypes.  Here clothing serves as symbolism for each character’s place in the society.  Years before the incredibly successful Gossip Girl (another Josh Schwartz created series), The O.C. proves less flashy than its East Coast counterpart.  Wonderfully capturing the spirit of California, these trust-fund kids trade the power suits and overcoats for swimsuits and beach wraps.  As Donnie, a waiter at the Crab Shack and minor character, accurately sums up, “Welcome to Newport, where things only appear to be casual.”

Ryan starts the series off in a modern take on the 1950s iconic bad-boy style made popular by Marlon Brando and James Dean. Ryan’s dark jeans and white t-shirt are accented by a grey hoodie, simple black leather jacket, and black work boots.  His rough exterior contrasts nicely with that of the residents of Newport and makes him instantly recognizable.  The Cohens work to help him fit into society.  There is even a particularly touching scene in the first episode where adoptive father Sandy shows him how to tie a tie. As the series progresses, Ryan loosens slightly, but continues his tough guy demeanor through a strong use of a cold color palette- blues, grey, and black dominate even his cleaned up wardrobe.

The Cohens’ high-school age son Seth may possibly have been one of the first TV characters to make being a nerd cool.  Sure video games, superhero movies, and Comic Con have taken mass media by storm, but in 2003 these were still fringe genres.  Tall, skinny, with a self-described “Jew fro,” Seth Cohen stole the hearts of many teenage girls with his sarcasm, wit, and colorful, quirky wardrobe.  Dressed almost exclusively in Penguin brand for much of the series, Seth’s style mixes retro-inspired pieces, bright colors, and graphic elements.  In stark contrast to the cold, rigid nature of Ryan’s wardrobe, Seth’s costumes mix earthy browns with funky greens, purples, and bright reds. 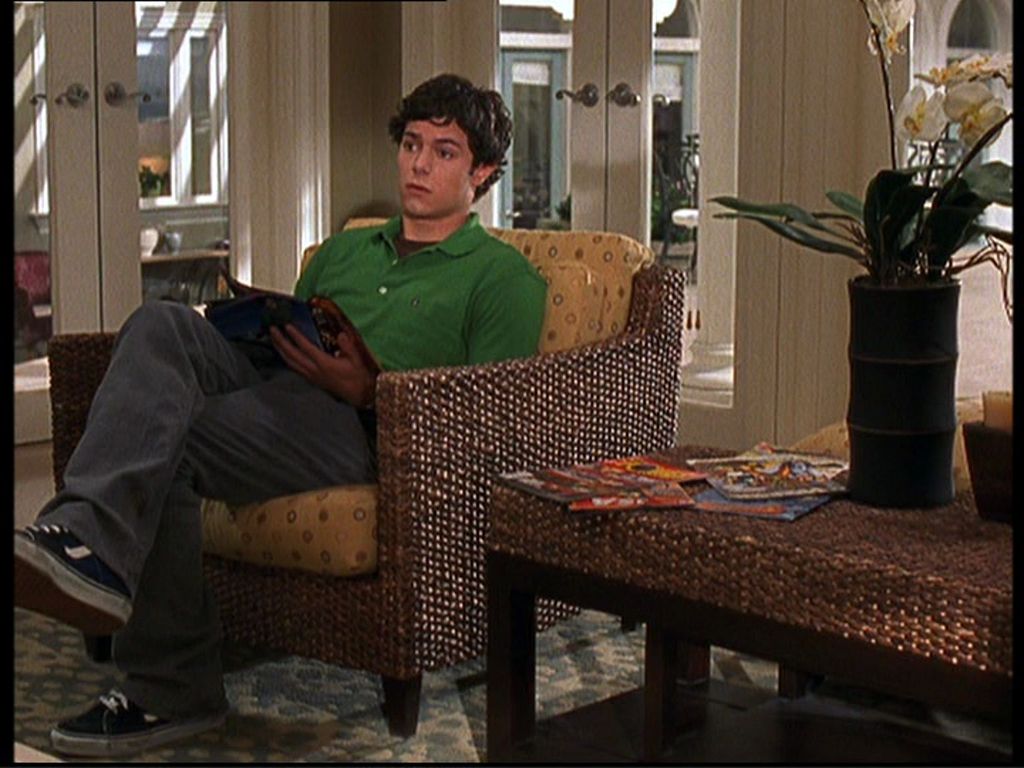 The use of layering, especially short sleeve over long sleeve shirts, as well as sweaters and track jackets, serves as symbolism for the depth of one of the series’ most thoughtful characters. 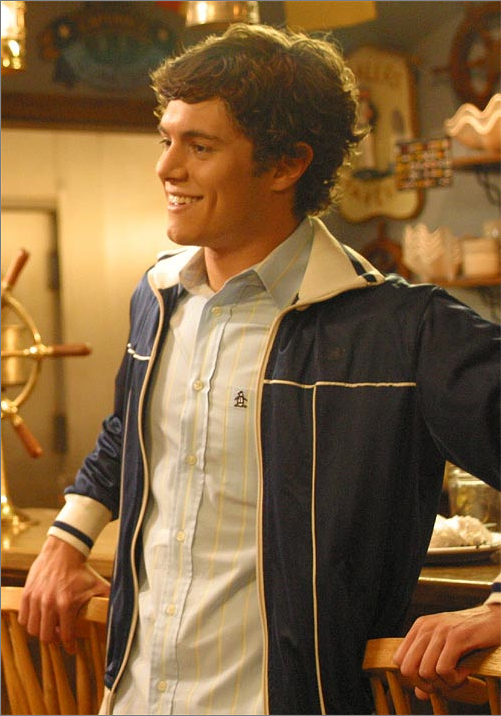 Not afraid to be self-deprecating and referential, some of Seth’s less serious looks speak to his role as pseudo-narrator, offering insightful, meta comments about the community and scenarios. 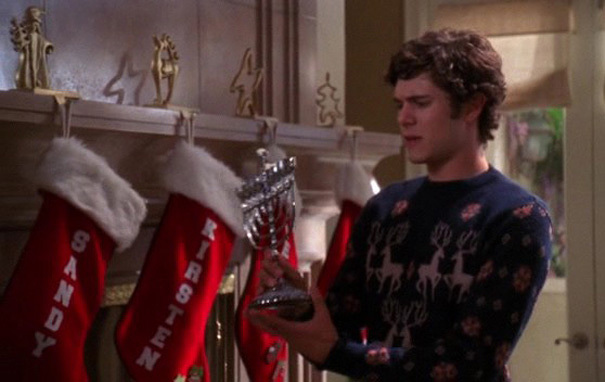 Beautiful, feminine, and sweet; next-door neighbor Marissa captures Ryan’s attention within minutes of arriving in Newport.  She is wealthy, popular, and well connected.  But we quickly learn that there is more to Marissa than first meets the eye.  She surprises Ryan and Seth both with her impulsive decisions and taste in music.

Costumed in a mix of expensive feminine pieces like pleated skirts and floral patterned tops with cargo capris and checkered vans, Marissa’s style nicely fits the duality of her character. 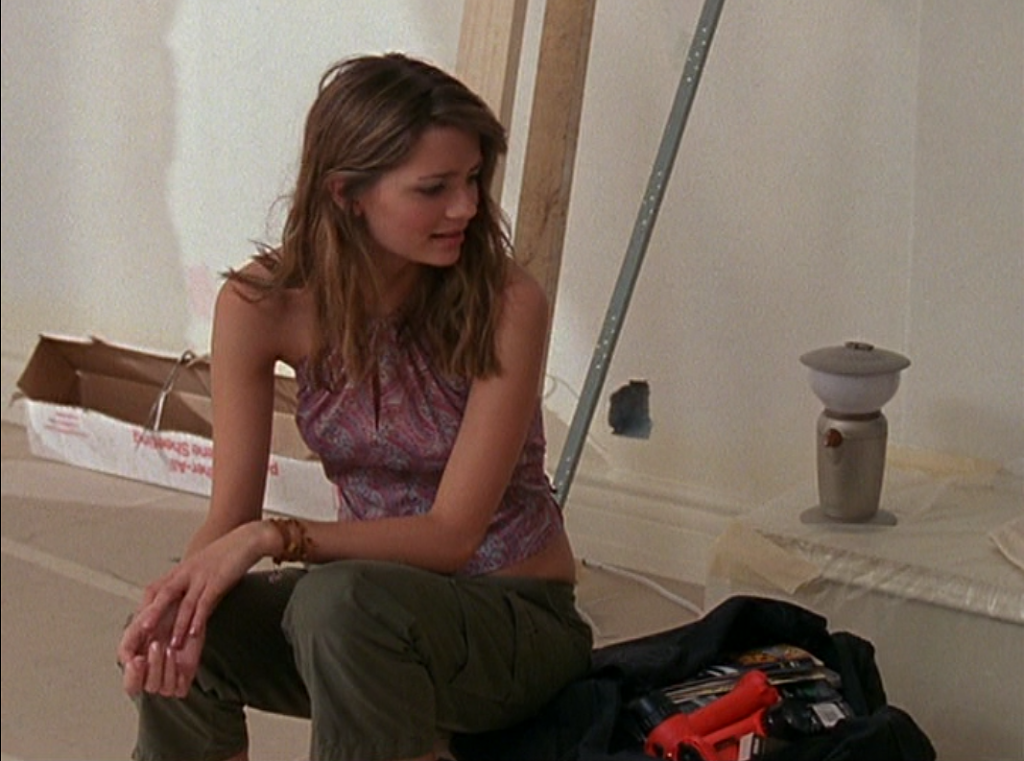 Where Marissa bucks the stereotype of the naive girl next door, her best friend Summer is the picture of the loud-mouthed spoiled rich girl. She never holds back from sharing a sharp comment or harsh word when it enters her mind.  Summer’s style is a mix of bright colors, tight-fitting, low cut and short outfits that she barely wears. 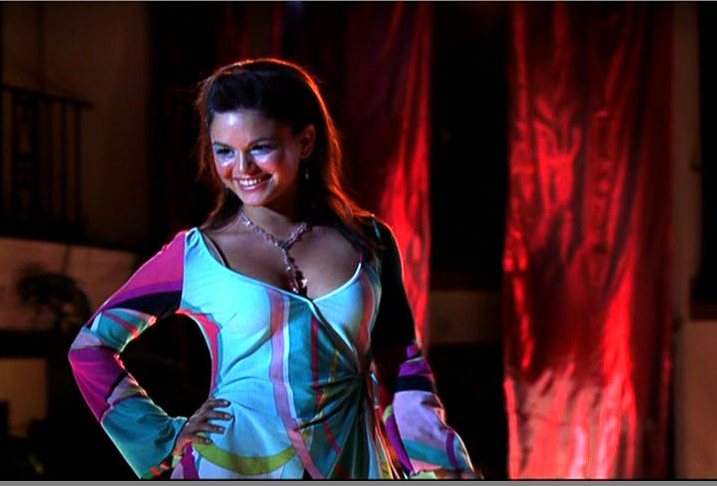 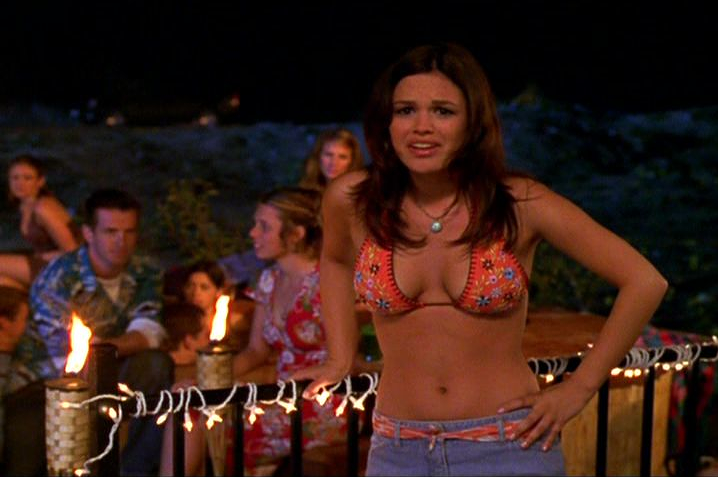 From a logical stand-point, the eventual coupling may seem destined for disaster (and trust me, there’s plenty of that), but from a strictly visual perspective you can step back and see how the simple and practically dressed Ryan and Marissa, and the expressive and playful Seth and Summer would end up together (well, off and on at least!).

From Sandy’s board-shorts and eyebrows that just won’t quit, to Julie Cooper’s velour tracksuits, the parents have their own fair share of iconic looks.  As high-powered business woman, even Kirsten Cohen’s casual looks embody a structured, refined luxury. 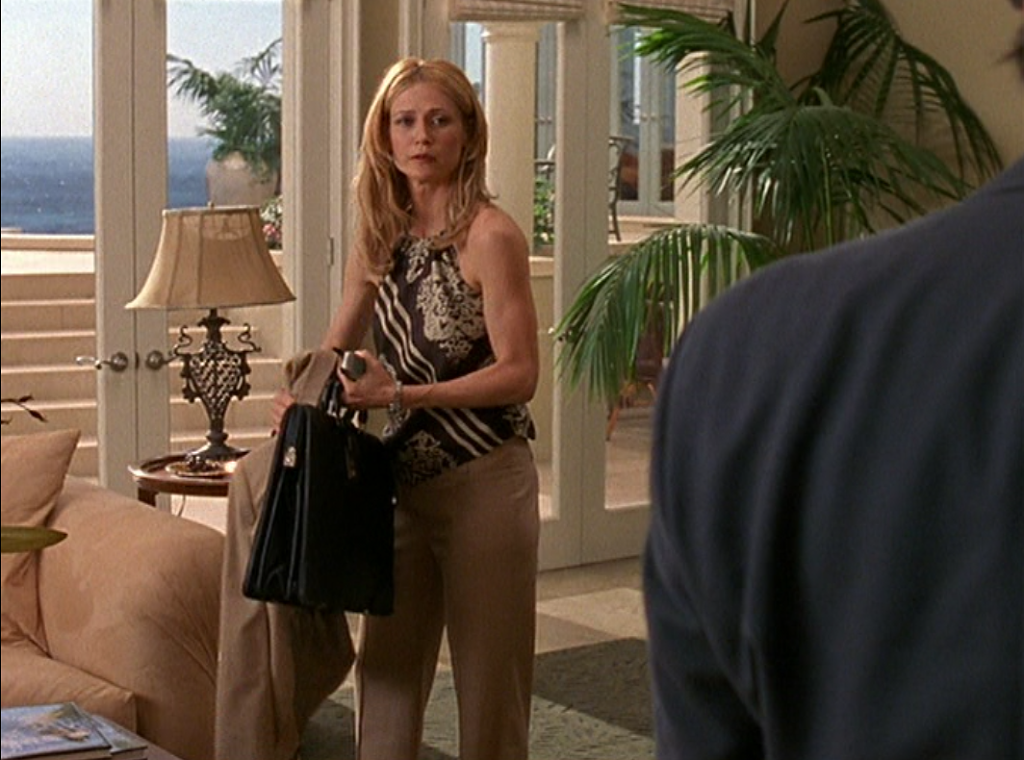 In contrast, her husband Sandy’s style leans in a much looser and more casual direction. 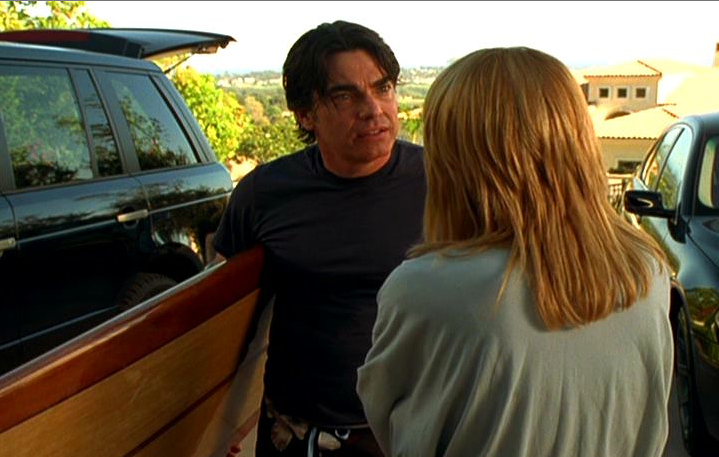 As mean-spirited gold digger fighting to stay on the top of the pile, Julie Cooper epitomizes flash and trash. From the velour track suits that would come to be associated with rich, over-tanned, Southern California moms, to the overly processed red and blonde striped hair, Julie’s character would seem more a caricature if I didn’t know first hand that women like that populate Newport Beach. 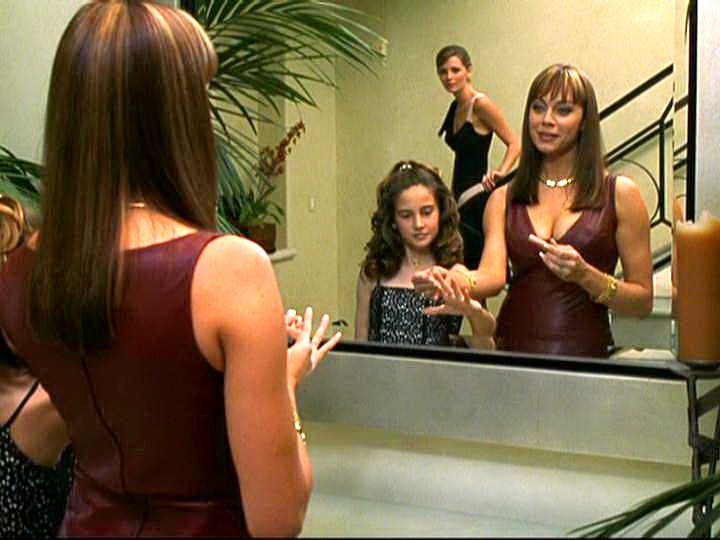 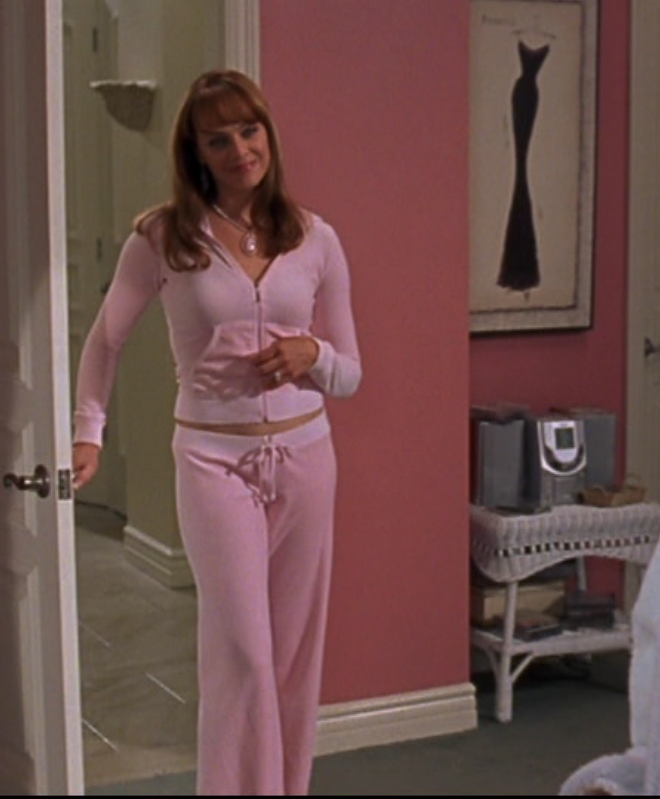 Looking back at the first season, now 10 years since it aired, it is amazing to see just how dated it all already looks.  But what stays true are the iconic elements of dress that help to wonderfully support a story about the timeless pursuit of fitting-in.